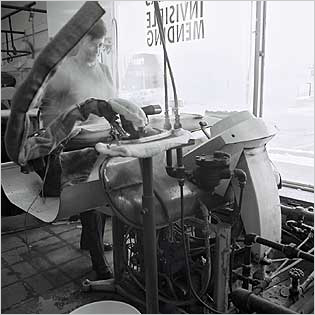 Made with the assistance of Charles Street Video.

Machine sounds ranging from a MIG welder and metal driller to a steam machine duo in a drycleaner and a weaver's loom: what to record was determined by the machine's scale and the operator. All recorded sounds are women operating machines where the even rhythm of the machine was varied by the operator's interaction/gesture.

Recording Machines is composed in two parts. The first part is seven machines heard simultaneously, the field recordings taken from a small tie and belt manufacturer. One of these machines is a manual text stamping machine. In the second part of Recording Machines, this machine's sound continues and is used to determine what and how much of the other sounds you hear: the other recordings are heard within the rhythm of the stamp machine. sections based on the length of the activity: the sound of one spool of yarn being woven, one customer's groceries being added, one latte being made, one unit welded, one complete unit drilled, one customer's order pressed, one part of a pattern sewn, one ceramic pot thrown. The title refers both to the apparatus used to record and to the literal process of recording machines.