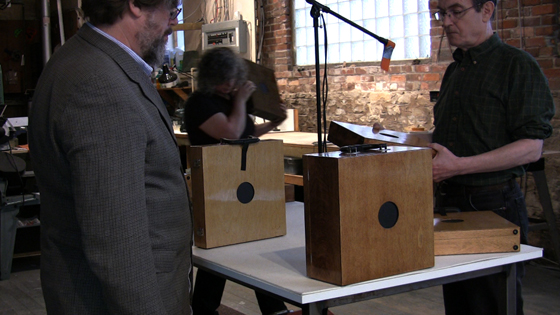 A Case for Sound: Nina

A Case for Sound is used to construct the sound work Nina using audio from Nina Simone’s performance at the Montreux Jazz Festival in 1976.

A Case for Sound is a sound object made to look somewhere between a suitcase/carrying case, record album box, instrument and portable record player. The object is constructed with wood and finished to a high gloss, holes are cut in each side for the speakers. Inside an MP3 player loops an audio segment. A motion switch interrupts the audio when the object is tilted. If repeatedly tilted, the interrupted audio can sound similar to a skipping record.

A Case for Sound was originally part of a commission by Artengine (Ottawa, Canada)